This guide describes how to use PowerVC to export a Power LPAR for import into Skytap. To learn more about PowerVC, see the Additional resources section.

Overview of using PowerVC for export

IBM Cloud PowerVC Manager, an Infrastructure-as-a-service (IaaS) offering, provides a self-service cloud portal for IBM Power Systems via OpenStack. OpenStack is a collection of open-source software projects that enterprises or service providers can use to set up and run their cloud compute and storage infrastructure. 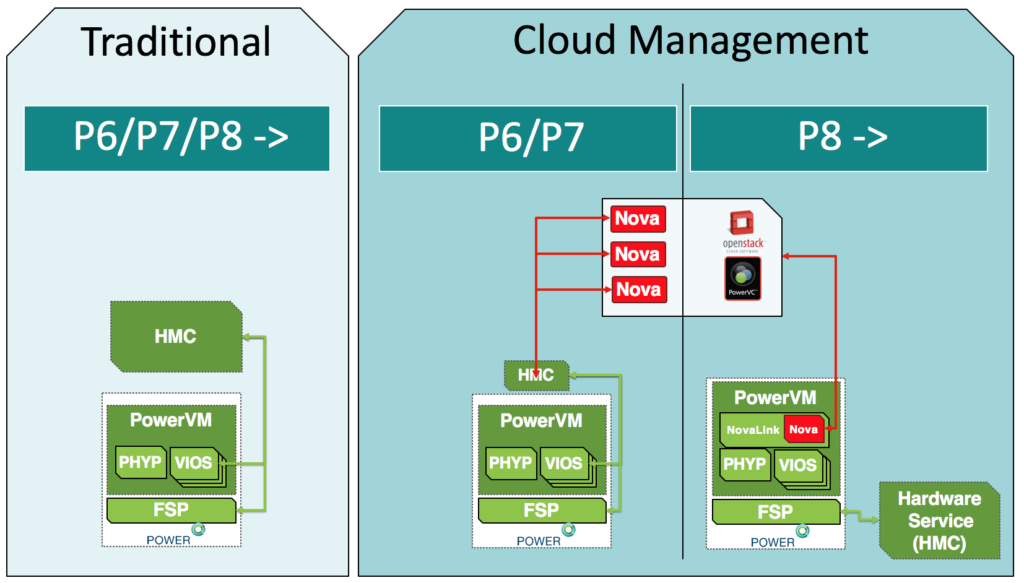 The sections below explain how to install and configure IBM PowerVC Standard Edition and IBM Cloud PowerVC Manager, in an environment with HMC (Hardware Management Console) and NovaLink. IBM PowerVC provides the ability to perform virtual image capture and can take a snapshot of a VM and export it as an OVA. Once this is done, Skytap can recognize the OVA and import the LPAR using our existing import process.

What is PowerVM NovaLink?

The Hardware Management Console (HMC) is a hardware appliance that you can use to configure and control one or more managed systems. You can use the HMC to create and manage logical partitions and activate Capacity Upgrade on Demand. Using service applications, the HMC communicates with managed systems to detect, consolidate, and send information to service and support for analysis.

This section describes the following:

The PowerVC architecture supports a single management host for each managed domain. It is not possible to configure redundant PowerVC management hosts that control the same objects.

The supported operating systems for running PowerVC are as follows:

These guest operating systems are supported for deployment:

Processor capacity depends on the type of host that is being used as the PowerVC management server.

The installer has the following storage requirements:

Note: We recommend that you install all updates for HMC.

If you plan to manage NovaLink:

Ports used by PowerVC for inbound and outbound traffic

PowerVC implements several services. Each service has an assigned port number. The link below shows the ports used by PowerVC for inbound and outbound traffic, depending on the installed version.

PowerVC should be the only application in the LPAR.

Extracting the tar image to an installation directory:

Mounting the DVD and extracting the installer media 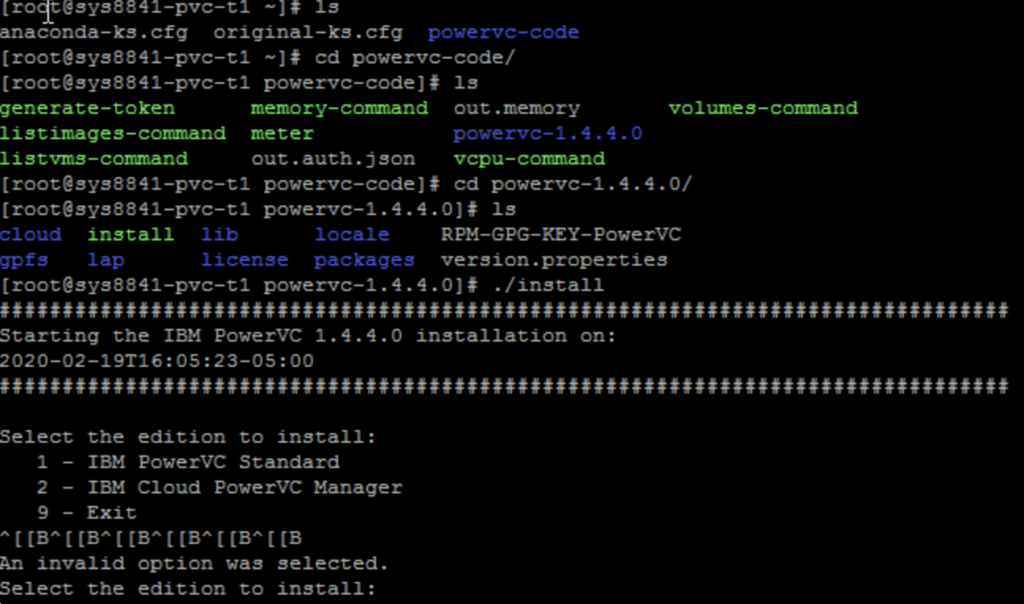 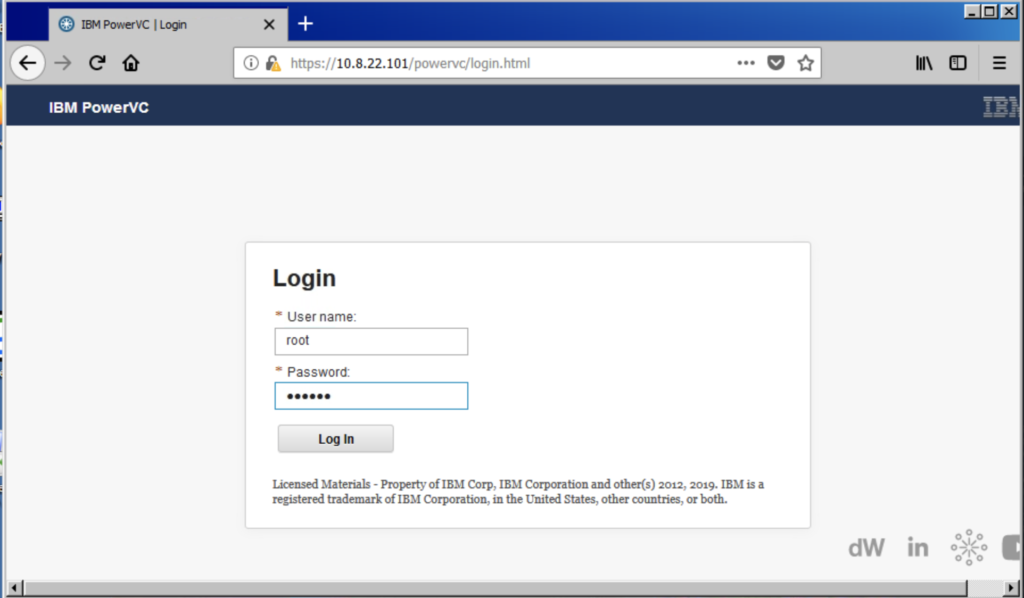 Log in with the URL provided from the command line after the installation completes and use the same credentials used for logging into HMAC.

The first step when adding a host is to run the Add Host task. For PowerVC Standard Edition managing PowerVM, you must provide the HMC’s information and connect to it. PowerVC will then present a list of all the hosts being managed by that HMC. You can select the ones to add.

The image below shows the form to fill out to connect to a new HMC. The display name is the name that appears in the PowerVC application. 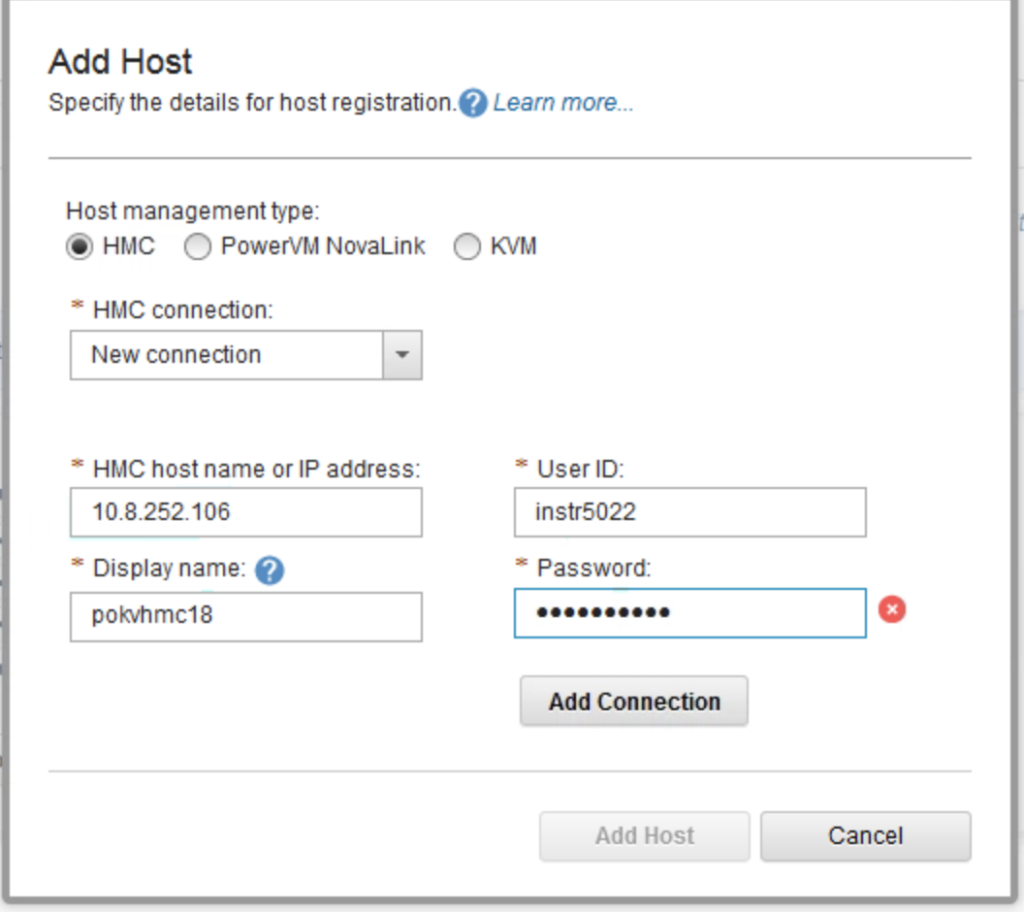 After providing the HMC login details, PowerVC will display all the hosts that the HMC manages. Select one or more of the hosts and click Add Host. When you add a host, PowerVC can manage VMs already created on that host. 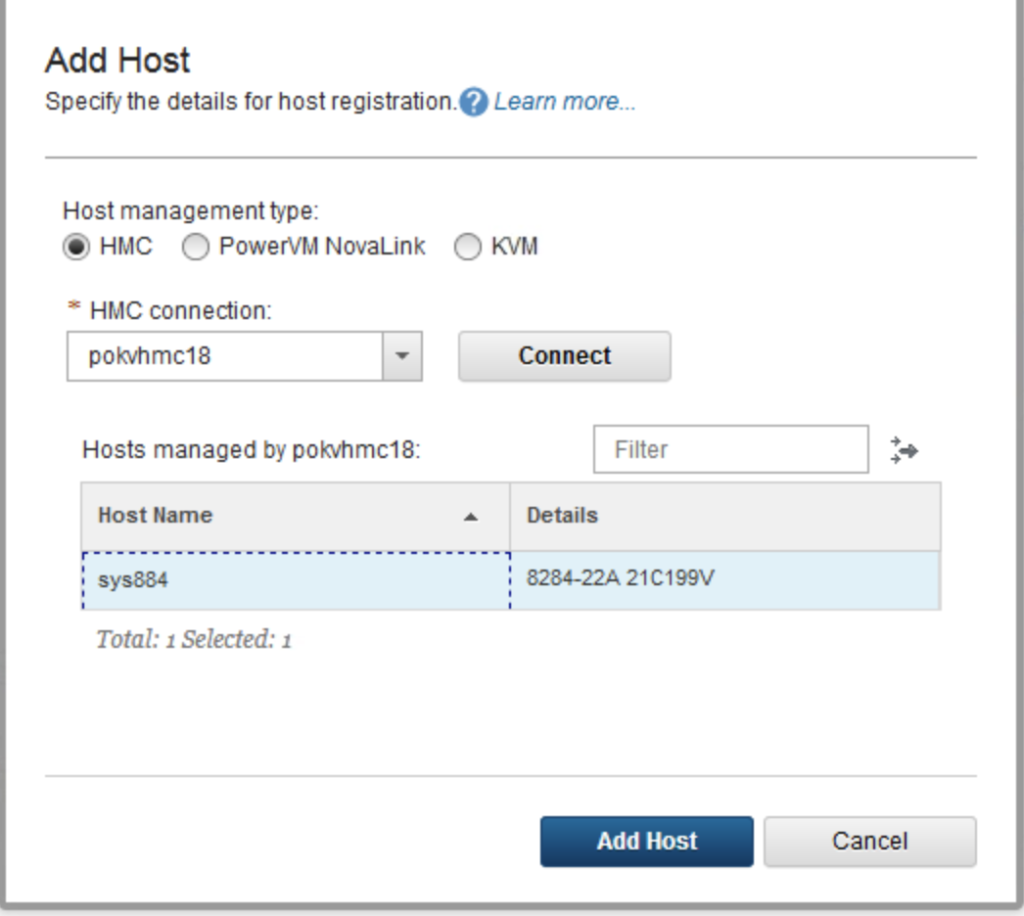 Before you can start performing tasks in PowerVC, you must register the resources that you want to manage. You must register storage providers to allow PowerVC access and manage storage. However, PowerVC can discover Shared Storage Pools (SSPs) and register them automatically when connecting to the host.

Tip: Adding existing VMs from a host is referred to as “onboarding” the VMs.

After a VM is added to PowerVC, you can perform operations from PowerVC. Although the PowerVC applications are automatically updated for configuration changes made on the HMC, be careful to avoid a situation in which some VMs are managed by PowerVC, and others are managed on the HMC.

If you remove a host, all its VMs are also removed.

The virtual machine managed through PowerVC can be stopped, started, restarted, deleted, captured, resized, and migrated.

Capturing an LPAR Image and Exporting

One of the biggest advantages of having PowerVC is its ability to capture existing VMs as images within the image repository. You can capture a virtual machine that you created or deployed.

Before a virtual machine can be captured, it must meet specific requirements.

How to capture a virtual machine

When the virtual machine is captured, all volumes that belong to its boot set are included in the image. 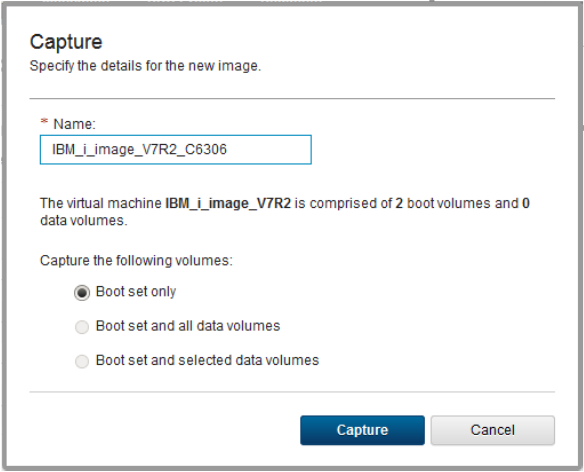 Note: We recommend that you select the Boot set and all data volumes option. Make sure you have enough storage space to capture the combined size of all volumes. 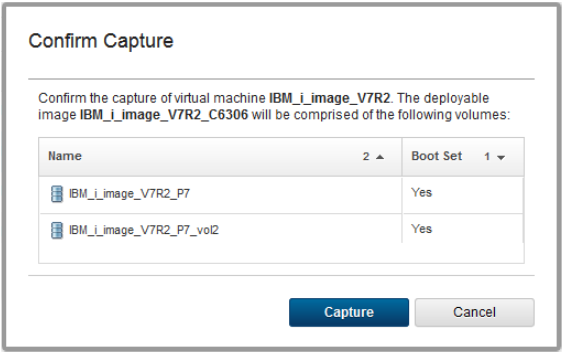 Click the Images icon to show the virtual images that are available. You can also view their properties, delete them, and do other tasks. 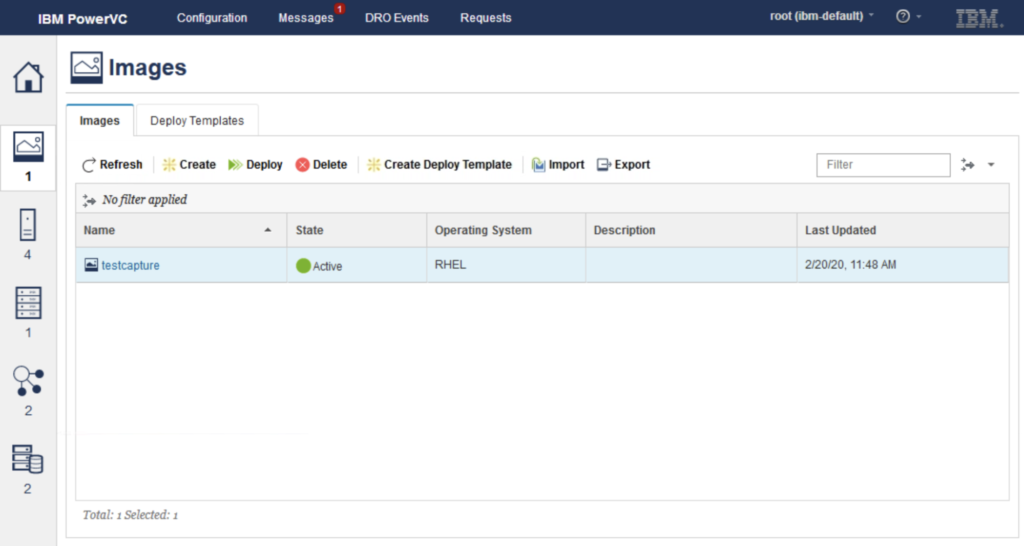 Each image has a status associated with it. If the status is Active, then the image is ready to be deployed. You can also click the Refresh button to update the status of the images.

Run the powervc-image list command as the root user to view the available images.

powervc-image export – Exports a deployable image from PowerVC to a local OVA. For example, to export an image named aix71 into compressed OVA format, run the following command:

The link below explains in detail on how to export an image, depending on the PowerVC version used: https://www.ibm.com/support/knowledgecenter/en/SSVSPA_1.4.3/com.ibm.powervc.cloud.help.doc/powervc_export_image_cloud.html

If you encounter issues when you run the powervc-uninstall command, you can clean up the environment by using the following command:

This command forces the uninstallation of all components of PowerVC.

A: Both can export images. For more information, see: https://www.ibm.com/support/knowledgecenter/SSVSPA_1.4.3/com.ibm.powervc.cloud.help.doc/powervc_features_cloud.html

Q: What is the limitation to the size of LPAR export?

A: The available local storage capacity must be at least twice the combined size of the volumes you plan to export.

Q: How can I be sure that PowerVC is completely removed after export is done?

A: This command forces the uninstallation of all components of PowerVC:

Q: Does this work have any impact on my daily operations?

A: No, this won’t have any impact on the LPAR, apart from shutting down the LPAR.

Q: How do I export and move LPARs that are larger than 30TB into Skytap?

A: The available local storage capacity must be at least twice the combined size of the volumes you plan to export.

Q: How long does the export process take?

A: Export rate is about 10 MB per second.

Q: Are exports done sequentially or in parallel?

A: Exports are sequential.